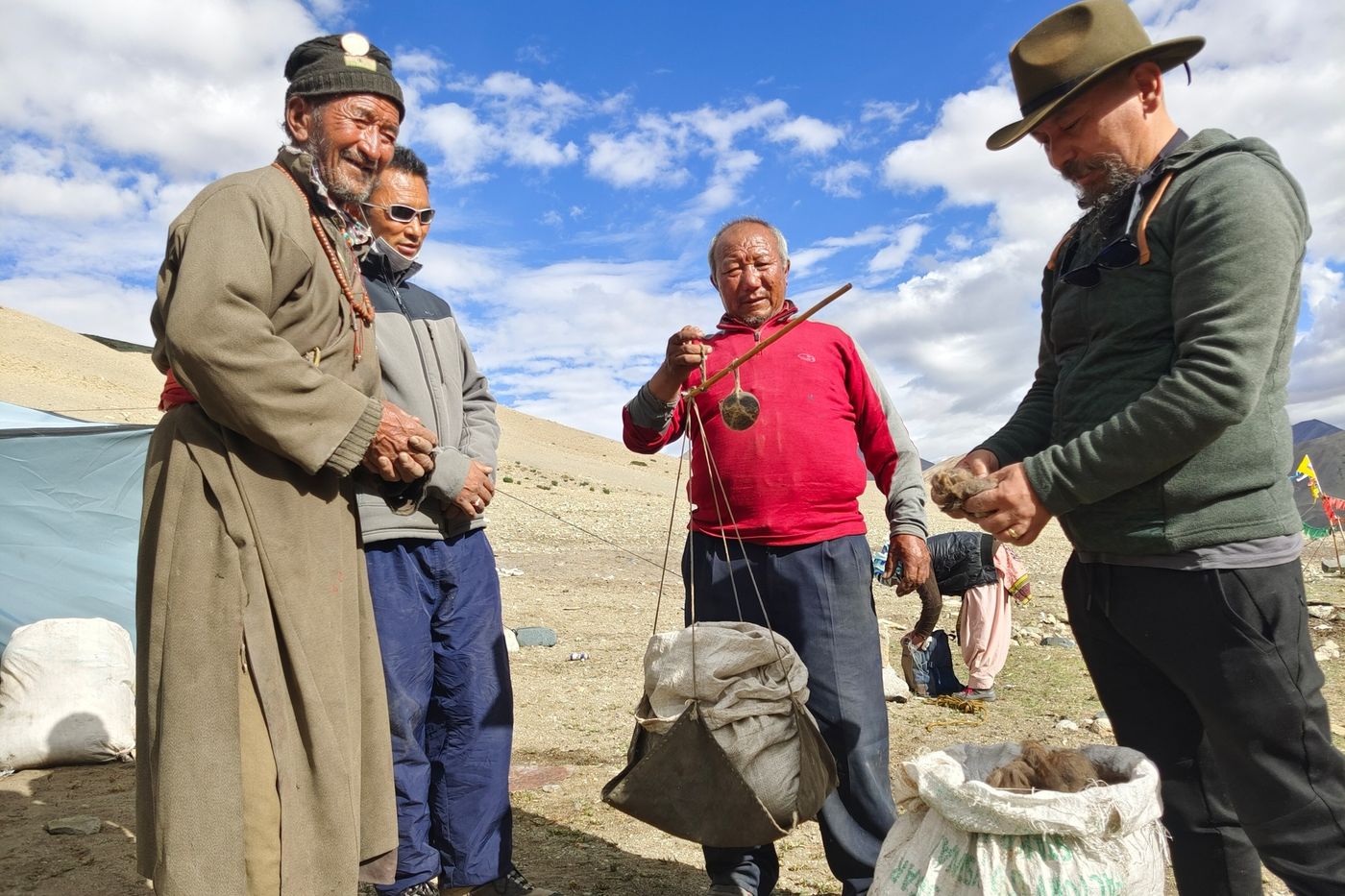 The fleeting shadows of the clouds roll over the ocher and sandy mountains. The first rays of the sun reveal a lunar landscape emerging from the depths of time. On the edge of the ancient Buddhist kingdom of Ladakh, India, the nomads’ camp is nestled along a river, in the Himalayan maze of the cold Changthang desert.

With calloused hands, men and women proceed to milk cattle, slipping between the warm fleeces of yaks, sheep and pashmina goats. They are about twenty families to reign over a herd of several thousand heads. At 5,000m above sea level, near the dizzying Taglang La pass, oxygen is scarce and life is harsh. But these nomads from the dawn of time have the beauty of the world for their eyes.

→ REPORT. In the heart of the Himalayas, artificial glaciers against drought

” That’s sublime ! », lets out Jigmat Norbu, who is nevertheless a child of the country, while contemplating the sunrise on the camp. A felt hat screwed on his head, this stylist and entrepreneur from Leh, the capital of Ladakh, visits his wool suppliers, the nomads of Kharnak, a “changpa” tribe of Tibetan culture. Jigmat Norbu can’t resist the pleasure of scratching the muzzle of chubby little yaks, born a few weeks ago and less intimidating than their majestic elders. And to caress the sweet pashmina goats with long white hairs who, in their enclosures with stone walls, observe him with curiosity with their amber eyes with rectangular pupils.

Renowned even in the West, these goats are the jewel of nomads. From the local “changra” breed, they produce the best quality pashmina wool in the world, also called cashmere, named after the more developed and neighboring region of Ladakh, where its traditional trade originates. “The higher you are, the warmer the goats’ hair is to protect them from the cold, especially on the chest, just like the yaks”, explains the 45-year-old entrepreneur. This exceptional quality is proven by the narrowness of the diameter and the length of the pashmina hair.

Wool from yaks… and camels!

Ladakh breeding is nevertheless limited and contributes only 1 to 2% to the world production of pashmina, which further justifies its high cost on international markets. “Raw pashmina also contains impurities to be brushed and removed, which can represent more than two thirds of the weight of the wool”, stresses Jigmat Norbu.

Less famous because it was treated in a rustic way for a long time, yak wool is another jewel that the designer reintroduced into his confections. This morning, he buys two chestnut-colored bags of it, which, along with gray, is considered the luxury of yak wool with a generally black coat.

With their shop, Jigmat Norbu and Jigmet Wangmo present wool from every angle. / Jigmat Couture

Cleaned, spun and woven in winter by nomadic women, these wools come in dozens of different textiles. They are transformed into shawls, clothing and decorative objects, and presented in the elegant Jigmat Couture studio which the entrepreneur runs in Leh with his stylist wife, Jigmet.

The couple also processes wool from Bactrian camels, a two-humped species from the Nubra Valley, another Ladakh originality. These fibers are left in their original colors, or sometimes tinted with natural pigments.

“The Art of Slowness”

“In the past, only the nobles used the pashmina and most of the production went to Kashmir, explains Monisha Ahmed, from the Ladakh Arts and Media Organization (Lamo). Yak wool was used to make blankets, bags and rugs. In Ladakh, Jigmat Couture pioneered the development of traditional textiles with a sense of style, modernity and luxury. This encouraging momentum emerged with the recognition of a local identity, endorsed by the new generation. »

→ READ ALSO. Between India and China, the tense face-to-face on the invisible border of Ladakh

“I claim the art of slowness”, comments the stylist. For ten years, it has worked for local employment while respecting the way of life of its craftsmen. “I like to weave yak wool when I have free time”, comments Yang, a nomadic grandmother, who uses a loom strapped to the back. Patiently, she weaves centuries-old friezes, in patterns that once allowed nomadic clans to identify their bags as they traveled to sell wool and salt.

Herd of goats in a camp located in the Changthang desert. / Vanessa Dougnac

For Jigmat Norbu, the promotion of local arts also involves a textile museum that he created in Leh, where he exhibits clothing and objects once owned by nomads, peasants, kings and merchants of the salt road. “It’s my way of returning to Ladakh. »

A threatened way of life

But, today, the way of life of the nomads is threatened. Many of them settle, entirely or for a few months a year, in the outskirts of Leh. “It’s sad to see our culture disappear,” breathes Yang, who remembers 70 families living on the heights of Kharnak, compared to less than 20 now.

In the camp, Tsering, a 78-year-old nomad with a lined face, is formal: ” There is no solution. The winters are too hard and the young people no longer want to stay with us. » He wears an old hat on which are proudly pinned a pin of the flag of India and another with the effigy of a Buddhist master.

Jigmat Norbu points to the lack of supervision by the authorities: “Why aren’t schools and mobile clinics created to accompany the nomads in the pastures? », he wonders.

“While the nomadic way of life is disappearing, the herd is not disappearing, because there is a demand, tempers the expert Monisha Ahmed. This means that there will always be people who will be sent to the mountains to take care of them. »

The sheep protect the goats

The growing appeal of the pashmina has also enriched the tribes of Changthang. “It’s a good business” recognizes Sonam, a 58-year-old nomad serving tea to Jigmat Norbu, in a tent blackened by smoke from the stove. He has 600 heads, including fifty yaks. “Faced with the profit made with the pashmina goats, we keep fewer and fewer sheep, he continues. But this creates an imbalance in the distribution of livestock. »

Because during the cruel winters, when temperatures can reach -35°, it is the sheep that surround and protect the pashmina goats. The kids are buried in holes dug in the ground to stay warm and not perish. Farmers are now seeing an increase in goat mortality, due to a lack of protective sheep. Mortality is intensifying with the increase in extreme climatic episodes and snowfall in Ladakh, the Himalayan region hit hard by global warming.

It’s 7 o’clock in the morning. One after the other, the shepherds lead their herds for the day towards the pastures, according to the ancestral rhythm. They are the guardians of a wool of unparalleled softness, born in the most hostile landscapes on the planet. Supervised by the dogs, the thousands of goats, sheep and yaks soon fade to the horizon, tiny black dots evolving on the side of the mountains, in this labyrinth of immensity and solitude.

Pashmina, the gold of the steppes

Pashmina, cashmere or changra. Pashmina is also called cashmere, in reference to the region bearing the same name. The pashmina goat, or changra for the nomads, is nevertheless raised on the high desert plateau of Changthang, in Ladakh. Its wool contributes only 1 to 2% to world production, the bulk coming from China and Mongolia.

Exceptional quality of Ladakh pashmina. In this region, the narrowness of the diameter and the length of the pashmina hair give it its exceptional quality. The diameter is 14 to 19 microns, up to six times thinner than a human hair. Each goat provides 200 to 250 grams of pashmina. Depending on its level of purity, the wool is sold between 2,500 and 10,000 rupees (30 and 120 €) per kilo. A real pashmina shawl costs between €90 and €520 on the international market.

The last nomadic herders. In Ladakh, the herds belong to the Buddhist nomads of the “changpa” tribes, whose way of life is threatened. Among them stand out the herders of Kharnak, hardly 20 families, each having generally 400 pashmina goats, 100 sheep and a dozen yaks. 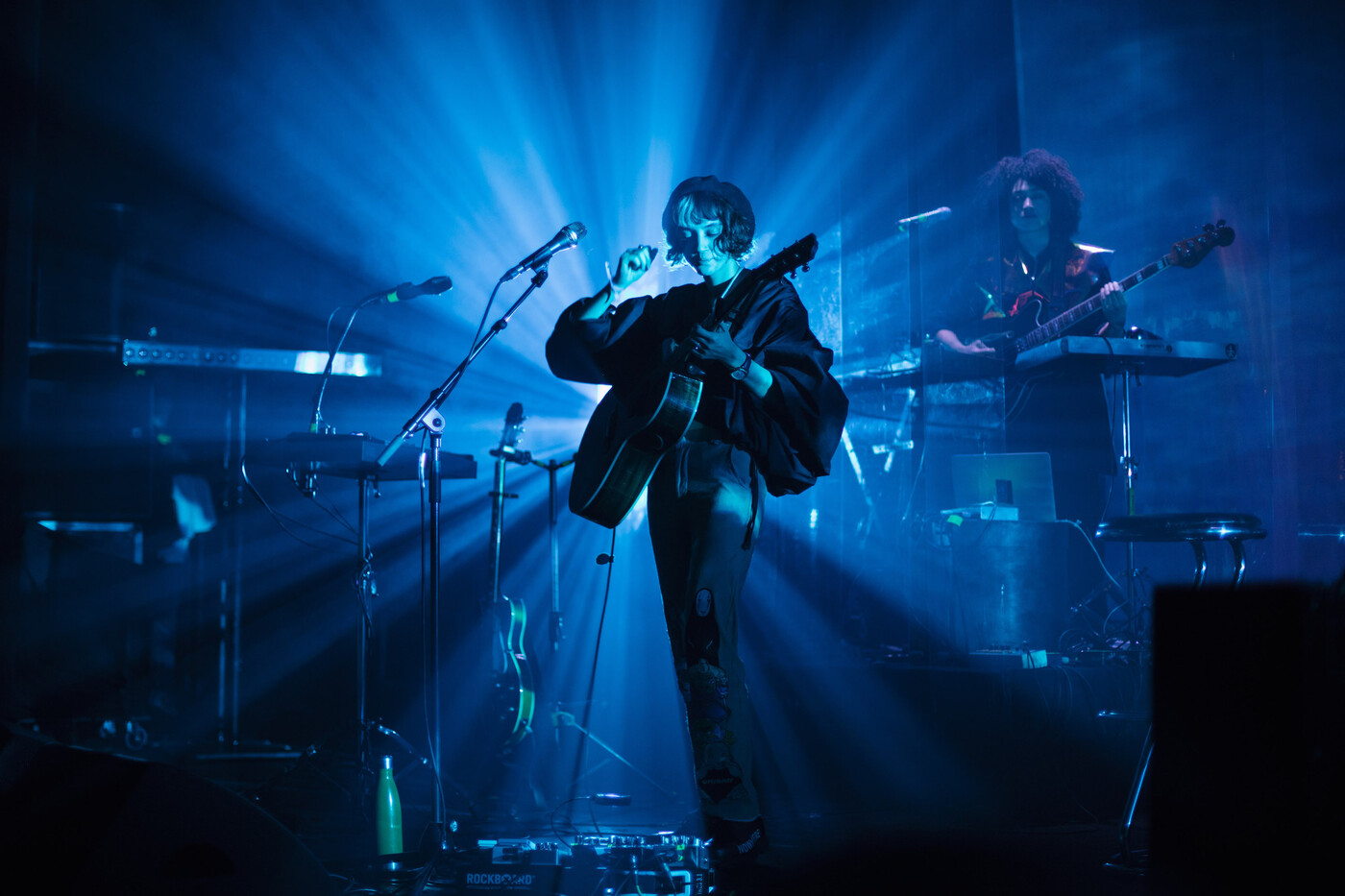